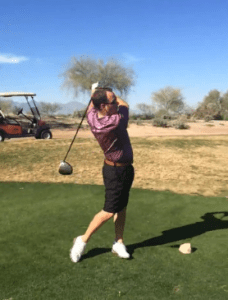 We saw Marc McWilliams at our flagship site, Wild Horse Pass 6 weeks ago. He did his school with one of our Senior West Coast instructors, Craig Waryan, who is simply extraordinary. Playing on Thursday March 19th, at the Green Tree Country Club, in Midland TX (par 71): in Marc’s words here is what just happened;

“I’ve only practiced since that 96, I emailed you about-until Thursday. My boss calls and asks me to play with him and 2 others. On the range I felt like it was all coming together. Mostly cloudy which gave me targets in the sky to focus on instead of ground targets.

On the first tee box we are talking about which game to play and I told Jeff I was going to shoot my best round ever so he better be ready. He replied “well, can’t let you beat me so guess I’ll do the same”.

I missed one fairway by about 6 feet. Hit all the others in the dead middle. First round that I’ve ever played with the same ball.

First round ever without a triple bogey on the card. It felt amazing. I shot a 82 which is my best round by about 5 shots. I’m proud of you and me. Feels awesome.

Jeff normally shoots between 77-87 and he’s a 7 handicap. Most days I would have stood a chance of beating him for the first time. That is until he shot a 69 which was his best round of his life!

Our families came up to the club afterwards for dinner and some celebration. It was a really great moment we shared and a day I’ll never forget.”

EDITORS NOTE: What Mark accomplished is pretty amazing: just six weeks after his school with Craig, he beat his personal best score by 5 strokes. We have a feeling that Marc will be continuing to improve and this is only the beginning for him. CONGRATULATIONS, Marc!

The Bird Golf Academy’s promise and Service Mark is the “Ultimate Golf Learning Experience”®. So what makes Bird Golf the world’s best golf school? Our unique concepts are born from many lifetimes of observation, teaching, and research. Among the professional staff of Bird Golf Academy our knowledge adds up to more than 350 years of teaching experience! Our golf school’s primary concept is our one/two student to one teacher ratio. This enables our instructors to devote their entire attention to each individual student, providing the student with personalized instruction.

Here are real stories of the success of our students.

What Our
Students Say